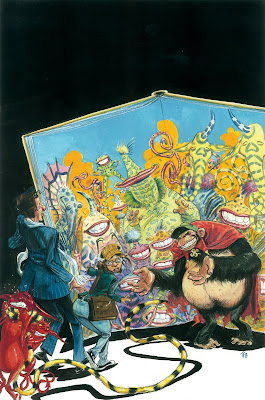 See, I suggested readers hand Ben a refreshing pale ale, and you urge them to physically molest him. I will always be Good Cop.

hey, i erased the bit about how they should gently squeeze his bum...

Sometimes I wonder if it is indeed safe to read this blog during work hours. I hope Mr Abernathy has a security detail surrounding him at the NYCC.

P.S. I love John Danby! There is something so fantastically uncanny about him. Some would even say super.

Oh, and I forgot to add: Hoping all goes well with the day job.

thanks ty. and thanks for the review.

although it's worth pointing out that the book never contained any boobs (just bums that needed to be excised) and it's not john byrne. you weren't the only one who thought so though. it's actually kind of amusing...

thanks larry. i hope it's a little creepy too.